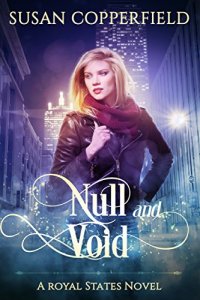 Born without magic, Mackenzie Little has few prospects in her null caste, but when her mother pushes her into participating in a charity auction everything changes. Bought by ex-boss, Dylan Mason – an elite magic wielder, she gets to live the fantasy life for a day. Nine months later, despite all precautions, Mackenzie gives birth to a little miracle of her own. Having someone other than herself to fight for, she strives to give her little miracle the best life offered, even if that means having to change a few rules to do it.

The Royal States of America presents as an interesting world to read and learn about. The world itself has territories ruled by kings and queens, the highest of the caste system that has been set into place by those with magic. Mackenzie falls to the bottom of that caste system, born a Null – someone who doesn’t have any magic of her own. Limited by her caste, she is forced into limited office work or manual labor in New York.

But when opportunities present themselves, she jumps from New York to Texas in order to fight for Null rights and push to help make her caste more equal in the eyes of the laws within the Kingdom of Texas. And she’s not only armed with her tough skin growing up a Null, but also with the ferociousness that comes from being a new mother, one who wants to be able to give her little miracle the world and opportunities she had.

This book had many ups and downs, and I felt incredibly lucky to be able to come along for the ride with Mackenzie. I enjoyed every page, and I can’t wait to continue in this world. The next book does not continue Machenzie’s story, but I can’t say that it discourages me one bit, quite the contrary, it has me more excited because I’ll be able to see more of this world through the eyes of someone new, with a different outlook on life and potentially within a different caste.