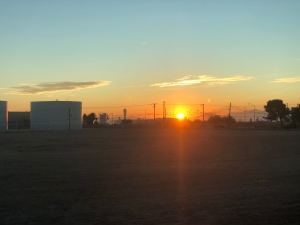 We’re more than halfway through December and because I was on a Conference trip for the beginning of the month, I’m not entirely sure where the month went.

From Dec. 6 through Dec. 13th I was in Las Vegas. The photo above is one of the sunrises from Vegas while I was on my trip. Vegas is a beautiful city, but it’s also hella expensive. You’re hard-pressed to find any lunch or dinner options that are under $20.

And if you’re wondering, did you gamble? Did you see a show? The answer is no. I don’t gamble. My dad was a big gambler and it got ugly sometimes so it kind of put me off gambling as a whole. And color me cheap, but I can’t justify a $200 ticket to a show, no matter how amazing it is. I just can’t. Especially not around the Holidays when I’m trying to spend on others instead of myself.

I did go to the Shark Reef Aquarium at the Mandalay Bay though. 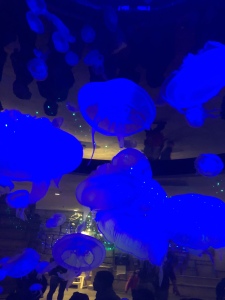 It was fun to see all the life there. And they have a couple ‘diver view’ tunnels with sharks swimming around above you that were pretty cool. Plus, the stingrays were adorable, they have several in a little touch pool that so long as you’re gentle you can pet them. And the jellyfish *points up at blacklight picture* were so pretty to watch. Having them under the blacklight made them look incredibly magical.

I didn’t get a lot of writing done because with working 9 hour days at the Conference, all I did was grab dinner on the way back to my hotel room and then crash by 8pm after I was finished eating.

Though, on the plane, I was able to listen to some audiobooks during the flight. Though I will say that I fell asleep in a couple places and had to go back and relisten to them while awake.

The view from the plane was pretty incredible as well. 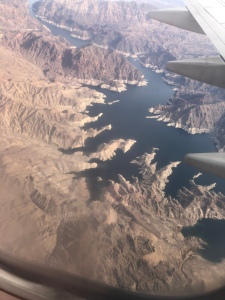 Overall it was an incredible trip. And for some of the downtime, I did have fun. And for the work portion of it, I was told I made everything run incredibly smooth and they were very thankful for it.

As the year slowly crawls to an end, it’s made me realize that I’ve been seriously slacking the last half of the year on my reading goal. I marked that I wanted to read 50 books this year, and currently, I’m sitting at 31 books.

This means that I have 19 books to read in the last two weeks of the year! Can I do it? We’ll see. You’ll have to stay tuned!