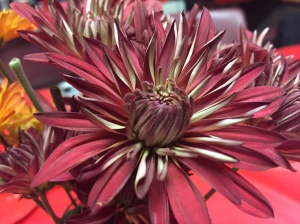 So while I have been working away at trying to finish my short, and toiling away at trying to plan out my WIP details for the upcoming NaNo, I’ve also been scouring the internet looking for prompts to try and do a little bit of one shot, like 1k shorts to just get into the October spirit.

Because, after all, October isn’t just about being prepared for NaNo. It’s the start of Fall. It’s Halloween. It’s Dia de los Muertos. It’s Samhain. It’s the time of year where the veil between the living and the dead is the thinnest. It’s where we get to dress up and be someone else for a night, or all month. And it’s where, even for those of us who don’t normally write it, we writers might want to try to craft something that goes bump in the night.

I don’t know what it is, or why it is, but my scouring the internet came up short. Most of what I found were prompts about sharing your memories of different events or emotions tied to Halloween. And that’s just not what I wanted.

So, I crafted some of my own prompts. Originally I was thinking of a prompt a day kind of list, but when everything falls into place that’s a lot for someone like me who works 9-5 Monday through Friday. So I crafted one prompt every other day instead. If you’re not looking at a calendar to count, that’s sixteen prompts.

If you’re planning to fill any of the prompts, leave a comment down below with which one(s) you’re thinking of doing. As well, if you post it anywhere, I’d love to see it so go ahead and throw a link in the comment, or tweet me @MerisCorner because I’d love to see them all written out!

I hope you enjoy these prompts. And I hope that you let me know if you fill them!

1 thought on “Prepping and Prompting”